Step by step conservation of an 18th century watercolour 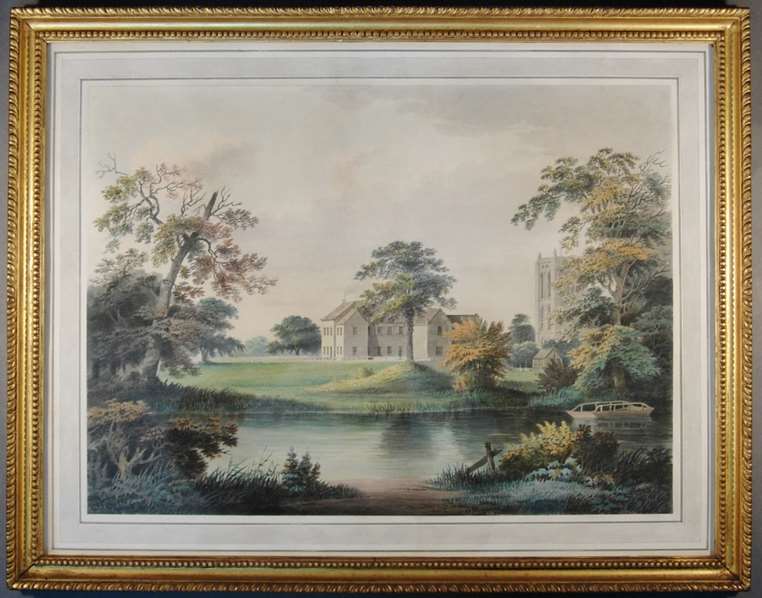 The Restoration of an Early English Watercolour by Francis Nicholson of Old Malton Manor and Church, Yorkshire.

The late 18th and early 19th century is considered a golden age for watercolourists in Britain.  One of the most noted of these artists was Francis Nicholson (1753-1844).  He was a founder member and President of the Society of Painters in Watercolour (now the Royal Watercolour Society).  Born in Pickering, Yorkshire many of his earlier watercolours draw on the Yorkshire landscape or depict the homes of local gentry. This example, showing Grange House (now Abbey House) and St Mary’s Priory, Old Malton, depicts a landscape little changed today. It was probably painted between the late 1770s and mid-1780s and retains an original decorative mount and probably its original carved and gilded frame. However, despite being un-faded, exposure to light, moisture and acidity has caused the paper to darken to an orange-brown tone, masking the blue sky and clouds. The decorative mount had also been adhered to a sheet of yellow, strawboard, at a later date.  Removing old backing boards such as those made from wood or straw is a common part of the work of paper conservators.  We all have our own favourite tools to assist splitting down the layers of board.  My own favourite is an old letter opener, made from a plastic called Ivorine. Clients bringing a watercolour to the studio for the first time are often surprised to hear that water can be used to clean the paper, including occasionally washing watercolours.  This is possible because over time the Gum Arabic binding medium becomes increasingly insoluble.  However, all colours are thoroughly tested and experience is also important in identifying sensitive media. Fig. 4 Whilst float washing the watercolour, surface tension prevents the paper sinking. Water was allowed to flood over the sky area of the image.

The Nicholson watercolour, in order to wash and remove the discolouration, was first lifted from the old decorative mount after slow humidification to soften the adhesive. Washing was carried out by floating the wetted paper on the surface of a tray of water.  Surface tension kept the paper from sinking and strong capillary forces drew soluble discolouration into the wash water.  Calcium added to the water also helped to raise the pH of the paper. Fig. 5 After washing, local beaching and rinsing of the paper it is ready to re-attach to the old mount.

Sometimes washing alone is not enough to remove stains. Two chemicals with a bleaching effect, hydrogen peroxide and sodium borohydride, are used in weak solutions, to further brighten the paper.  In this case, the former was applied as a 2%, pH 8, solution by sprayer and brush. This is something that should only be attempted by a qualified conservator who can safely rinse out any residues from the treatments. Fig. 6 The watercolour and mount re-assembled with wheat starch paste after pressing between wollen felts.

After cleaning, the watercolour was re-attached to the old decorative mount using wheat starch paste. Watermarks in the paper, which can help in dating artworks, were also recorded. An Act of Parliament in 1794 meant that all watermarks on British papers included a date.  The absence of such a date in the watermark in these papers, suggest the artwork was painted before 1794. Fig. 7 Seen in raking light, a watermark in the paper reads, ‘J Whatman’ in reverse.

One other reason why the watercolour paper might have darkened is that the face of the painting was pressed against the inside of the glass in the frame. This leaves it vulnerable to condensation and mould damage.  In order to maintain the original frame, the old glass was cleaned and taped to the rebate with acid-free, gummed tape to keep out dust.  Then strips of acid-free mount board were attached behind the frame rebate to help create an air gap between the watercolour and glass. Fig. 8 The glass was taped into the frame with white, acid-free, gummed tape to keep out dust and thrips.

Fig. 9 Strips of acid-free mountboard hidden behind the rebate create an air space between the underside of the glass and the face of the watercolour

Prior to the introduction of hardboard in the 20th century, frames were backed with thin strips of pine.  A sheet of oil-tempered hardboard was added to the back of the frame but the old pine strips and hand-made iron tacks were put back behind this as evidence of its original format.  Like the scene it depicts, this watercolour is now closer in appearance to the time it was painted about 240 years ago and is hopefully protected in its frame for the coming years. Fig. 10 The verso of the frame with the early, split pine strips and hand made iron tacks replaced over a new, oil-tempered hardboard backboard. Fig. 11 The watercolour by Francis Nicholson after conservation